The Pantani of Accumoli are glacial lakes located on the border of the Sibillini Mountains and Laga Mountains, nestled in a small valley surrounded by meadows and scenic landscapes breathtaking. During the period from late April to late October, the Pantani of Accumoli represent a paradise of nature. Here, every morning after 8, bulls, cows and horses living in the wild go to graze and drink creating a scenario naturalistic film. It ‘strongly advised to arrive before this time to enjoy the spectacle of the arrival of animals in the colonies ordered. The species of herbs and flowers that will accompany your journey are the most numerous, including the beautiful expanses of wild orchids. 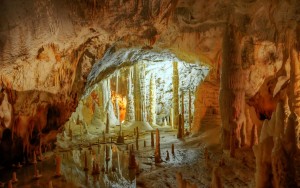 Hiking scenic Caves sentences are natural source karst caves where you can admire the sculptures of natural stalactites and stalagmites formed by layers of limestone over 190 million years through the work of water and rock. Extraordinary is the large cave wind, which could include the cathedral of Milan. 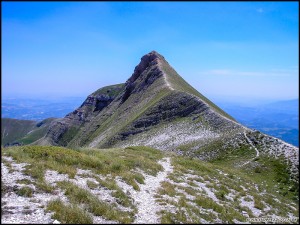 Monte Sibilla between history and legend, the mountainous owes its aura of mystery to the legend of the Sibyl, the mythological figure of the same name who lived in the cave, a cave that opens into a rocky hole near the top post at 2173 m above sea level. Currently the entrance is blocked by a landslide. 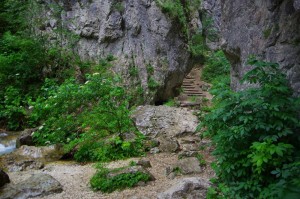 La Gola dell’Infernaccio opens the door to several hiking paths and hiking among the most ‘famous throughout the chain of the Monti Sibillini, the source of the river Tenna (Capotenna) and the Hermitage of San Leonardo. Additional locations are also possible as the arrival of the Hidden Falls and the rise, far more ‘challenging, toward the peaks that surround the entire walk. 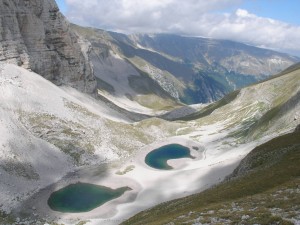 Pilato’s Lake site in Mount Carrier , the massive and the Sibillini National Park at an altitude of 1941 m asl In popular tradition, the lake was and is considered a magical and mysterious. It takes its name from a legend that in its waters would be over the body of Pontius Pilate sentenced to death by Tiberius. It is known, often called “the lake with glasses” for the shape of its complementary and interconnected reservoirs during periods of increased presence of water. The lake is home to a particular endemism, the Chirocefalo of Marchesoni is a small crustacean red measuring 9-12 mm and swim with the belly facing you. 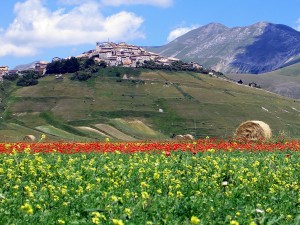 Castelluccio di Norcia is located atop a hill that rises on the plateau, one of the largest in central and inserted in the Mountains National Park Sibillini.L ‘height of 1452 m asl makes it the highest town Umbria-Marche Apennines. Opposite to it stands the imposing silhouette of Mount Vettore (2,478 m). The village is located about 28 km from Norcia, and is reached via a scenic route. According to Istat in 2001, is inhabited by 150 residents. Plans karst Castelluccio (1,350 m), about 15 km ², mainly the Pian Pian Grande and the Lost. They are famous for Fiorita, namely the massive flowering phenomenon that colors the plan in late May and early July (especially poppies, cornflowers, daisies). 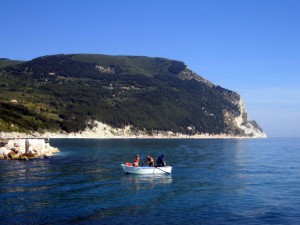 The Natural Park of Monte Conero with its 572 m high hill is the highest of the middle Adriatic and what has the highest sea cliffs in the Adriatic Italian (500 meters). E ‘can descend the cliffs to the Conero reach the secluded beach of Two Sisters.

Gorges Fiastrone erosion caused by river Fiastrone over the millennia, has produced stunning gorges where its water is channeled as in a tunnel. The place is well worth a visit for her beauty than for the morphological habitat that surrounds.